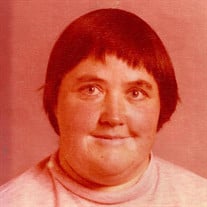 Flavian Joyce Fischer, 73, of Kalkaska, was received into God’s loving arms June 1, 2018 at her home in Kalkaska Medical Health Center. Flavian was born January 5, 1945 in Detroit and was adopted by her parents, Ernest and Lenore (Reidel) Fischer in March1945. Flavian grew up in Saginaw and was one of God’s special children. She attended Trinity Lutheran School through the 8th grade. Flavian moved to Grand Rapids when her guardian moved. There she worked in several positions in employer assisted programs. In 2000 she moved to Kalkaska. Flavian was able to live independently with assistance and worked for Grand Traverse Industries. When her medical problems became more than she could handle, she lived in several AFC homes until her health needed more constant care. Flavian’s final home before heaven was the Green Houses North and South of Kalkaska Long Term Care. She was very happy in that environment and developed many friendships with other residents and staff. She was always busy with activities, outings, and other special events. Flavian was predeceased by her parents, Ernest and Lenore (Reidel) Fischer, and grandparents. She is survived by a brother, Ronald (Mary) Fischer of Merrill, nieces and nephews, and her guardian and friend of many years, her cousin Ardis Bauer of Fife Lake. A special thank you from the family to the Green house North and South for their excellent care, understanding, and patience. Also, thank you to Hospice of Northern Michigan for their quick response to Flavian’s needs. A memorial service in Flavian’s memory was held Wednesday, June 6, 2018, at Wolfe-O’Neill Funeral Home. Reverend Eric Black, St. Paul’s Lutheran Church, presided. Interment was in Roselawn Memorial Gardens, Saginaw, Michigan. She was laid to rest next to her maternal Grandmother Reidel whom she was close to in her younger years. No service was planned for the interment. Memorials may be directed in Flavian’s name to the North and South Greenhouse Activity Fund, 419 S. Coral, Kalkaska, MI 49646. The family is being served by Wolfe-O’Neill Funeral Home, our family serving yours.

Flavian Joyce Fischer, 73, of Kalkaska, was received into God&#8217;s loving arms June 1, 2018 at her home in Kalkaska Medical Health Center. Flavian was born January 5, 1945 in Detroit and was adopted by her parents, Ernest and Lenore (Reidel)... View Obituary & Service Information

The family of Flavian Joyce Fischer created this Life Tributes page to make it easy to share your memories.

Flavian Joyce Fischer, 73, of Kalkaska, was received into God’s...

Send flowers to the Fischer family.