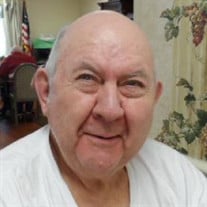 Ludwig Frances Houdek, 75, of Suttons Bay, passed away on September 28, 2018 in Traverse City. He was born July 3, 1943 to Frank and Mary (Mavinkovich) Houdek. Ludwig was raised on the family farm in Gills Pier and attended Northport school. He was a long-time employee at Frigid Foods and other canning plants in the area. In 1981 he married Ruth Luepnitz, the love of his life. The two of them took great pleasure in sharing what they had and making people smile. Lud grew up on a farm in Suttons Bay with his two younger sisters Agnes and Rosie. As a young boy, Lud would follow his Dad wherever he went, generally to the fields, barn, and woods. He enjoyed working right beside him feeding cattle, horse, and pigs, milking cows and cleaning stalls. In the fields Lud harvested crops from early mornings to dark. He was always a hard worker! His mother had gotten a job picking cherries at the neighbor Jerome’s farm. She would always take Lud and his two sisters with her. Lud would help pick cherries and his two sisters looked up to him and would follow suit. Jerome and his family became more than neighbors, there were like family for life. As Lud grew of age, his Dad helped him to get a job with him at Frigid Goods Canning Plant. He along with his family later worked at Northport Canning while continuing to work on the farm. After Northport closed Lud began working at Traverse Bay Canning Plant. For fun, Lud enjoyed playing games with his sisters on the farm. One of the most challenging games Lud would come up with was walking across a very high beam that ran across a double door of the barn. He grew up with no TV or telephone. They had one radio which they listened to for the weather and news. Every Sunday Lud, along with his family, would go to church at Saint Wenceslaus. Faith was very important in his life. Lud attended Northport school until the farm became to much for his Dad to handle without him. So, Lud quit school to help his family. They raised their own cattle, lots of chickens, two huge gardens and plowed many fields. Lud would walk behind the plow that was pulled by a horse. In the fall when their fruit orchards were ripe the family would pick apples to be made into fresh cider. Fresh cider was so delicious! In the winter, Lud would go with his Dad to the woods to cut wood for their stove and furnace for heat. Lud was always a loving, caring man who enjoyed living life simply, while working hard at whatever he was doing. No matter where he was, no matter what the situation where you could always see a smile on his face that brought smiles to all around him. While working at Traverse Bay Canning Plant Lud met the love of his life Ruth. She brought warmth to his heart. They dated for about two years and then married at Saint Michael’s Church, in Suttons Bay. They shared many happy years together. Lud was preceded in death by his wife Ruth (Luepnitz) Houdek; his parents Frank and Mary (Mavinkovich) Houdek; and his sister Agnes Garvin. Lud is survived by his sister Rosemary Luby; his nieces Linda, Jackie, Mary, Theresa, Peggy, and Susan; his nephew Danny; and great nieces and nephews. A memorial service will be held Saturday, October 13, at 10 AM at St. Wenceslaus Catholic Church in Gills Pier. The family is being served by Wolfe-O’Neill Funeral Home, our family serving yours.

Ludwig Frances Houdek, 75, of Suttons Bay, passed away on September 28, 2018 in Traverse City. He was born July 3, 1943 to Frank and Mary (Mavinkovich) Houdek. Ludwig was raised on the family farm in Gills Pier and attended Northport school.... View Obituary & Service Information

The family of Ludwig Francis Houdek created this Life Tributes page to make it easy to share your memories.

Ludwig Frances Houdek, 75, of Suttons Bay, passed away on September...

Send flowers to the Houdek family.