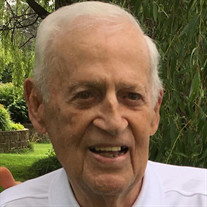 Paul J. Keene, 86, of Fremont, MI, passed away peacefully at The Curry House in Cadillac, MI on July 3, 2018. Paul was born on March 15,1932 in Flint, MI to Charles and Daisy (King) Keene. He graduated from Michigan State University with a Bachelors degree, majoring in Physical Education, and from the University of Michigan with a Masters degree in Educational Administration. Paul started his career as an educator in Saginaw as a high school physical education teacher, then moving on to principal in Vassar, MI. Finally he served as a superintendent in the following districts; Port Austin, Hale, Webberville, and Wolverine. His leisure time was spent hunting, camping, and fishing for Walleye. Many summers were filled with happy memories of the grandchildren as they spent time with he and his wife, Doris. The couple enjoyed living out their faith in each community they resided in. Singing in the choir or attending services was near and dear to both Paul and Doris. Paul lived out his faith with those he met, by praying and sharing about his Lord and Savior Jesus Christ. Paul is survived by his sister Virginia (Keene) Berry, and brother-in law Larry & Anna Bontrager, sister in-laws Betty Keene, and Tammy Keene. His children; Christopher & Donna Keene, Cheryl & Robert Ross, and Craig & Polly Keene. His grandchildren; Randy Blanchard, Kimberly Keene, Kari & Michael Keene, Autumn & Kevin Anderson, Catherine & Justin Visser, Nathanael Ross, Michelle & Bob Hinds, and Katherine Hodges. His great-grandchildren; Autumn & Tom Darga (great-great grandchildren; Elizabeth & Louie), Sabrina Blanchard, Kyle Blanchard, Luke Anderson, Brody Anderson, Carter Anderson, Isabella Ross, Ayvah Visser, Bas Visser, and Hannah Whitney, as well as several great-grandchildren, nieces and nephews who he dearly loved. Paul is preceded in death by; his loving wife of 53 years, Doris (Siler) Keene, His grandchildren; Paul Evan Keene and Casey Jane Keene, His parents; Charles and Daisy (King) Keene, His brothers; Jack, Doug, Mason, and Chuck. His brother in-law; Homer Berry, His sister; Joan (Keene) Bontrager, His sister in-laws; Ruth and Juanita, His nephew; Jimmy, and nieces; Judy, Joyce, and Marlene. There will be a service honoring the life of Paul, at Evergreen Bible Baptist, 1972 Saunders Rd, Kalkaska, Michigan on July 7th at 11:00 AM. The visitation will take place prior to the memorial at the same location at 10:00 am. In lieu of flowers you may make a donation to "Love A Child" https://loveachild.com/make-a-contribution/ The family is being served by Wolfe-O’Neill Funeral Home, our family serving yours.

Paul J. Keene, 86, of Fremont, MI, passed away peacefully at The Curry House in Cadillac, MI on July 3, 2018. Paul was born on March 15,1932 in Flint, MI to Charles and Daisy (King) Keene. He graduated from Michigan State University with... View Obituary & Service Information

The family of Paul J. Keene created this Life Tributes page to make it easy to share your memories.

Send flowers to the Keene family.